The sensor head - including the connector and cable section - are IP67G and NEMA Type 13 compliant. This means that stable measurement is achieved even in harsh environments containing splashing water or oil. In order to improve robustness - a common problem with contact sensors - careful attention was paid to the structure of the sensor body. The design incorporates a high-strength linear ball bearing and seamless body for additional durability. In addition, the reduced weight of the spindle means minimal wear from friction and significantly improved durability. These design improvements reduce maintenance and equipment downtime. 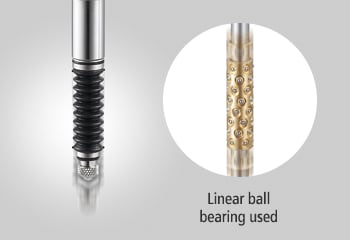 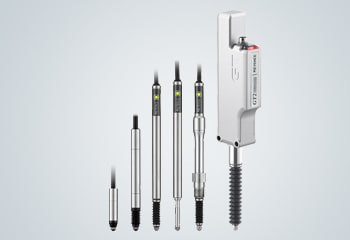 The GT2 Series is available in a wide range of heads, including pencil, air, and low-speed pressure types. Choose a design most suitable for the application.

Select from a variety of communication methods for easy integration

With an increased focus on traceability and IoT, the need to record values is becoming ever more pressing. KEYENCE sensors include a varied lineup of communication units capable of communicating with PCs and PLCs from various manufacturers. Simplified amplifier wiring makes it possible to greatly reduce wiring work.